ProPublica published an in-depth article detailing the prevalence of nursing home employees taking inappropriate images of patients and then sharing them on social media. In one example, an employee took an inappropriate photo of a resident and shared it on Snapchat. Even after spending three days in jail she was not overly remorseful, stating, “They just blew everything out of proportion […] I worked in health care for five years. Everybody takes pictures of the residents all the time. I’m not the only one.”

It’s not just nursing homes or assisted living facilities that have issues with staff members using their cell phones inappropriately. It happens everywhere, from childcare employees taking videos of children fighting each other, to fitness center employees taking photos of patrons in locker rooms. Someone may not even mean to take an inappropriate photo; an employee may take a picture of him/herself and capture a patron changing clothes behind them. As most people now have cell phones with internet and camera features, this problem has continued to get worse.

A generation of young workers have grown up with cell phones and social media. It’s just second nature for them to share what’s going on in their lives with their friends, whether it’s on Facebook or Snapchat. They may not be thinking about the consequences of what they post. As more and more young people enter the workforce, this issue must be addressed.

What Can Employers Do? 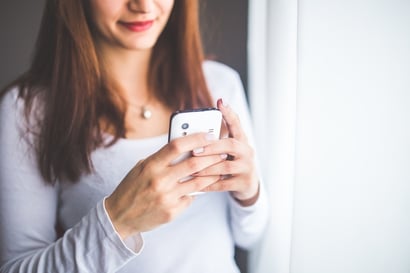 So what can employers do to protect both their business and their employees?

Implementing a no mobile device policy is a good place to start. Organizations that work with vulnerable populations, like children, people with developmental disabilities, or the elderly, should implement a policy that bans employees from having their cell phones with them while working. Employees can keep their phones where they store their personal belongings while at work. Reassure employees that in an emergency, their families can contact them by using the organization’s phone number.

As hard as this can be, everyone in the organization needs to follow this rule, from supervisors and managers all the way down. This will make it much more likely that employees will “buy in” and accept the rule. In addition, cell phone policies, like all policies, are meaningless unless they’re enforced. Have realistic consequences for what will happen if an employee is caught with a cell phone. These consequences must apply across the board, not just for younger or newer employees.

The only way to get employees to accept a no-cell phone policy is to train them on why the policy is necessary. Providing employees with examples of how quickly careers and reputations are ruined by one unfortunate post is a great way to start. A quick Google search will pull up many examples, from childcare employees fired for posting photos of children in their care, to employees in other fields fired after posting complaints about their employers. Clear training on what’s expected regarding cell phone use on the job and consequences for not following the rules are important.

Finally, establishing a “no photos” policy for the entire organization is another good idea. A real camera, not a cell phone, should be used to take photos for marketing or communication purposes.. This will make it easier to spot an employee taking photos with a phone. Again, having consistent consequences for anyone caught breaking this rule is crucial.