Over the Christmas holiday a fitness center was closed for several days so employees could enjoy some time off work and be with their families. This period of closure, however, provided thieves the perfect opportunity to stage a massive heist of a large amount of copper piping throughout the facility. When the gym owner returned to work after the holiday break to ready the facility for opening, he was shocked to see the catastrophic damage caused by the copper thieves. Copper had been stripped throughout the facility. Copper wiring was ripped from utility boxes, inside walls, and inside the ceiling. Copper pipes were even sawed off air conditioning units on the roof.  The damage to the building was devastating, leaving the facility without water or electricity and it took several months for them to clean up the damage and function normally again. The owner estimated that the facility lost approximately $25,000 a month while repairs and cleanup took place. The total damage to the facility cost $500,000 to $750,000, all for just $5,000 worth of scrap copper.

Why Are People Stealing Copper?

A wide assortment of building materials contain copper, including heating and air conditioning units, plumbing, gutters, electrical components, and more. The cost has increased from less than $1 per pound to over $4 per pound, with the average price around $3.

Theft of copper pipes, tubing, and wiring has been on the rise in recent years due to the increased value for scrap copper. The US Department of Energy estimates that this once minor problem has exploded into $1 billion a year nightmare. 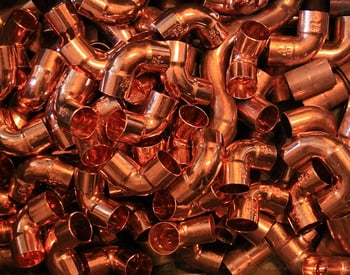 Construction sites, abandoned buildings, and commercial heating and air conditioning units have been the biggest targets for these thieves. More often than not the damage caused obtaining the copper vastly exceeds the value of the copper, but this does not deter the thieves. There have been numerous reports of air conditioners, valued at over $3,000, completely destroyed for no more than $25 worth of copper.

Not only are business stuck having to repair or replace equipment stripped of copper, the damage often results in the loss of electricity, water, and heating or air conditioning resulting in the discontinuing of business until the repairs are completed.

Understanding that copper theft is a very real problem is an important first step in protecting your community organization from copper theft, but there are more steps that can be taken to avoid this growing problem.

An easy and inexpensive way to deter copper thieves is to paint all copper components black.  This causes the copper to look like regular, worthless plastic tubing that no one would waste the time to steal.

Areas containing items with copper in them are always a potential target, and depending on the value of the item, a fence may be worth the investment. The amount of copper in most commercial air conditioners is never worth a great amount, but the real cost comes from the destruction of the unit and the time it takes to replace it.

Installing an alarm system to protect copper from theft is a great way to deter potential thieves and to catch those who do. There are many varities of alarm systems, and choosing one will depend on the location and type of  the object in need of protection. For heating and cooling units, for example, there are alarms that are triggered if the unit stops working.

Aside from deterring would-be thieves, surveillance cameras can aid police in capturing thieves resulting in either the return of stolen goods or incarceration preventing future thefts.