An AED Could Have Saved a Life

A 16-year-old high school basketball player had just made a game-winning shot in overtime when he suddenly collapsed to the floor. Initially, parents, coaches, and players thought it was due to exhaustion or just the excitement of the moment, but they all quickly realized something much more serious had happened. The young player was rushed to the hospital where he died later that night. After performing two autopsies it was concluded that his death was due to an enlarged heart. Both doctors, including a special examiner from Harvard, concluded that if the school had been equipped with an AED and it had been used properly, he would have survived.

Why Have an AED? 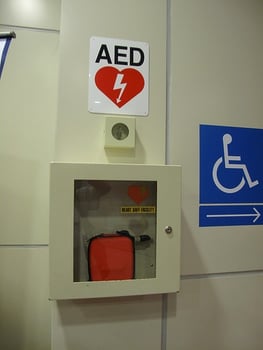 AEDs are an important, life-saving medical device that can diagnose potentially life-threatening cardiac arrhythmias and subsequently treat the arrhythmias by defibrillation. Defibrillation is an electrical shock therapy that stops deadly heart arrhythmias and helps establish a normal heart rhythm. If someone suffers a severe cardiac arrest (SCA) time is the most important factor in helping them survive. Using an AED can help restore their heart’s natural rhythm and keep them stable until emergency responders arrive.

Proper Storage of an AED

AEDs are important pieces of life-saving equipment and need to be properly stored to make sure they are accessible and ready to use should an emergency arise. Some of the factors that go into properly storing an AED include the following:

Staff knows where it is: There have been numerous instances of someone experiencing a cardiac emergency and someone called for an AED, but staff does not know where it is stored. All staff and volunteers should be trained to know where the AED is so they can grab it in a moments notice.

Stored in a locked area: AEDs are very expensive, which makes some people decide to store them in locked or secured areas. This is not recommended because a situation could arise requiring the use of an AED and if it is inaccessible it does no good. Also, if it is stored in areas where only certain people have access, valuable time could be wasted trying to locate the person to gain access to the AED.

Do not block or obstruct the AED: Wherever you store the AED within your facility, make sure that it is always open and accessible. Whether your facility is undergoing construction, a special event, or some other unexpected occurrence, make sure the AED is always within easy reach in the event of an emergency.

Maintenance of an AED

Even if an AED is accessible, it is worthless if it isn’t properly maintained. There have been numerous instances where people properly responded to an emergency and quickly got an AED only to discover that it is not charged. Proper AED maintenance requires a combination of inspecting and testing the device regularly. It is a good idea to routinely inspect an AED every three months and perform the following maintenance: