April is Distracted Driving Awareness Month. Everyone knows just how dangerous distracted driving is, but the statistics keep getting worse. According to the National Safety Council, an estimated 40,000 people died from car accidents in 2016. This is a 14% increase in the number of fatalities just two years ago. And a new study from Cambridge Mobile Telematics found that in most car crashes, distracted driving plays a role. 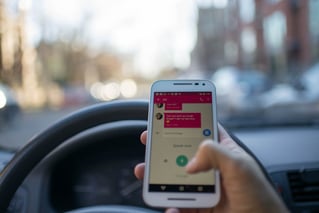 In 2015, we shared a scary video of distracted teen drivers behind the wheel. These teens knew cameras were mounted on their dashboards and they still looked down at their phones while driving, sometimes swerving or crashing. More recently, a truck in Texas was caught on video swerving all over the road just minutes before it crossed the center line and hit a church bus head-on. Thirteen people were killed. After the accident, the truck driver admitted he was texting.

So why don't people just stop using their phones while driving? While many drivers are diligent about staying attentive, most would admit to occasionally texting or making calls behind the wheel.

Fortunately, technology can now prevent people from using their phones while driving. Cell phone blocking apps and devices can prevent drivers from browsing the internet, making calls, or texting while behind the wheel. This can be very helpful for teen drivers or employers who are trying to ensure their drivers are safe. Most of these apps or devices allow for 911 overrides so the phone can still be used in an emergency.

Consider investing in this technology for your children or other loved ones who use the phone while driving or if you’re an employer who wants to keep your employees safer. You may even consider it for yourself if you're prone to using your phone in the car. It could save someone’s life.