Wisconsin Businesses Can Now Save Your Life

I was excited to see this month that Wisconsin has joined the growing list of states broadening access to epinephrine auto-injectors. Epinephrine auto injectors, commonly known by brand names like EpiPen, can mean the difference between life and death for someone with severe allergies. The new law allows more public facilities, such as amusement parks, restaurants, and sports arenas to stock epinephrine and requires employees to be trained on how to use the auto injectors. 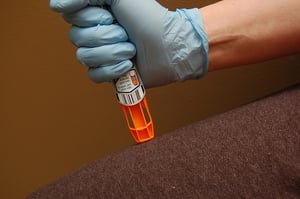 Most people with a severe allergy carry epinephrine with them at all times. It is entirely likely, however, that someone may be unaware that they have a particular allergy. Additionally, some reactions are severe enough that two injections are needed and many people with a severe allergy only carry one. With food allergies on the rise, especially in children, easy access to epinephrine in heavily-trafficked areas like restaurants may prove to be a lifesaver.

In states without this new legislation, doctors, nurses, or the allergy sufferer are the only people that can administer epinephrine. It has been recognized, however, that the drug is generally safe and easy to administer, even by people with no medical background.

These new laws are similar to laws that expanded access to automated external defibrillators, or AEDs. For someone suffering a sudden cardiac arrest, an AED can more than double their chances for survival, according to the American Heart Association. These devices, like epinephrine auto injectors, are easy to use and are now readily available in many public places, such as gyms and malls.

The new Wisconsin epinephrine law also contains a provision protecting businesses and employees from liability under Good Samaritan protections, similar to AED laws. Before stocking epinephrine auto injectors, businesses should check their local laws and spend time training employees to recognize anaphylaxis and the correct way to use the auto injectors. I also strongly encourage all organizations to follow these important steps when administering medication to children.