Because of the efforts of Senator Tammy Baldwin and her incredibly dedicated staff in Madison, Wisconsin and Washington, D.C., we may all be safer next time we visit a potluck, picnic or childcare center. We recently received word that Senator Baldwin submitted a formal request to the Consumer Product Safety Commission (CPSC) to have them review the dangers of slow cookers.

West Bend's concern with slow cookers started in 2007. Between 2007 and 2011, we received five separate notices from child care centers indicating that infants had been severely burned by scalding hot liquid. In each instance, the infant tugged at the cord of a slow cooker being used to warm baby bottles which caused the slow cooker full of water to cover their body. As you can see in this very graphic photo, these injuries are devastating.

Ever since we received the first notice in July, 2007, we've been working to remove this hazard from child care centers. 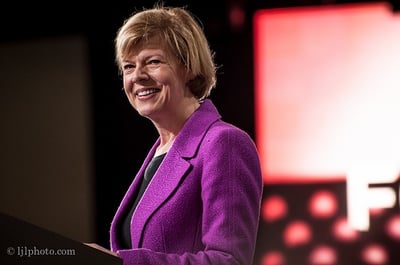 We sent cautionary fliers to each one of the 7,000 child care centers we work with, we published safety articles here on CultureOfSafety.com, we reached out to state childcare regulatory agencies, and we even created an online awareness campaign to get parents and providers to change their habits. None of these effectively reduced the exposure.

After all, even if every child care provider in the country removed slow cookers from their centers, the threat of being burned would still exist in homes, churches and community centers. Every potluck or picnic with a slow cooker could be the site of a life-changing incident. Think about your plans for the not-too-distant 4th of July weekend. How many slow cookers full of nacho cheese sauce, baked beans, and chili are going to be strung together in high-traffic areas? If your holiday is anything like mine... a lot.

After receiving Senator Baldwin's request, the CPSC initiated an in-depth review and identified at least 4,900 occurrences of slow cooker burns between 2002 and 2011. And just as our experience suggests, it was also determined that the large majority of these cases involved children younger than five years old.

At this point, the Consumer Product Safety Commission intends to work with Underwriter Laboratories, a voluntary standards development organization, to initiate conversations about updating the safety standards for slow cookers. We're hopeful that Senator Baldwin's efforts have kickstarted the process of mandating magnetic breakaway cords on all slow cookers. For the first time ever, parents and child care providers may be able to relax whenever children are in the proximity of slow cookers.

On behalf of everyone at West Bend, thank you Senator Tammy Baldwin!