Ask the Experts: At what height do most ladder injuries occur?

Common sense leads us to the conclusion that a shorter ladder carries less risk of injury than a taller one, and to an extent, this is probably true. Someone can, however, sustain serious injury from even a short fall. A 2011 estimate from the Occupation Injury and Illness Classification System (OIICS) claims that 35% of fall fatalities [PDF] were from heights of 15 feet or less. 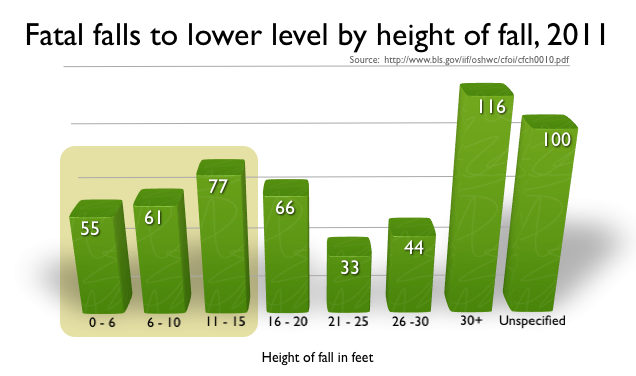 On the other hand, there have been cases of individuals who have surprisingly survived falls from much greater heights. Vesna Vulovic, a Serbian flight attendant, survived a 33,330 ft fall from a plane in 1972. The point is, focusing on the height of a ladder to determine whether or not it’s safe ignores other very important and potentially life-saving factors.

Ladder injuries aren't caused by the height of the ladder, they're caused because people aren't using them properly.

For example, if you need to reach a high place, it’s much safer to use a tall, appropriately sized ladder that allows you to maintain good balance than to use a short ladder. Additionally, if you’re resting your ladder too close to a building, your risk of falling is greater. The Extension Ladder Fast Fact Sheet from the United States Office of Compliance has a very helpful graph showing the proper distance a ladder should be from a structure. 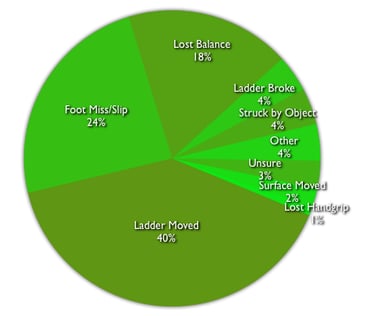 Once you've selected an appropriately tall ladder and set it up with the correct pitch, there are still plenty of ways for you to injure yourself. Consider the data presented to the right:

If you're interested in reading more about ladder safety you might enjoy our article on The 4 Biggest Mistakes People Make on Ladders. You might also want to read up on Proper Step Stool Use since falls can occur from any height.