I hope the alliterative title attracted your attention, because this is shaping up to be quite an issue. I first read about the dangers associated with detergent pods on the Seattle Mama Doc Blog, and now I've been seeing news stories pop up everywhere.

You've probably seen these detergent pods already. They're small plastic balls full of pre-measured detergents and fabric softeners. Similar packets are available for dishes as well. In addition to being more convenient (read: more expensive), these little packets also look a whole lot more like a fun toy than they do detergent. 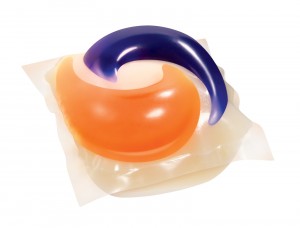 And because the packages are specifically designed to dissolve rapidly in water, the detergent releases quickly when a child pops one into their mouth.

According to the Associated Press, almost 250 people have called poison control centers across the country after a child ingested all or part of these packets. In severe cases children have been hospitalized and been required to use ventilation tubes for breathing.

It would have been extremely difficult for both the detergent manufacturers and parents to identify that this could ever become an issue, but now that it's clear that a trend is forming, parents and child care providers should take immediate steps to get rid of their detergent pods, or at the very least, place them in a safe location out of the reach of children. Proctor & Gamble has already announced that they would add additional child-proofing features to the packaging that holds the detergent pods.

Be sure to contact Poison Control at (800) 222-1222 anytime you suspect a child has ingested or been exposed to anything dangerous.