You could just feel that March 2012 was warmer than usual. Well, the National Oceanic and Atmospheric Administration (NOAA) released a report on Monday that proves it. And the data is shocking.

The following graphic shows the difference from the average temperature for the contiguous United States. The entire Midwest experienced March temperatures 10-15° warmer than usual. 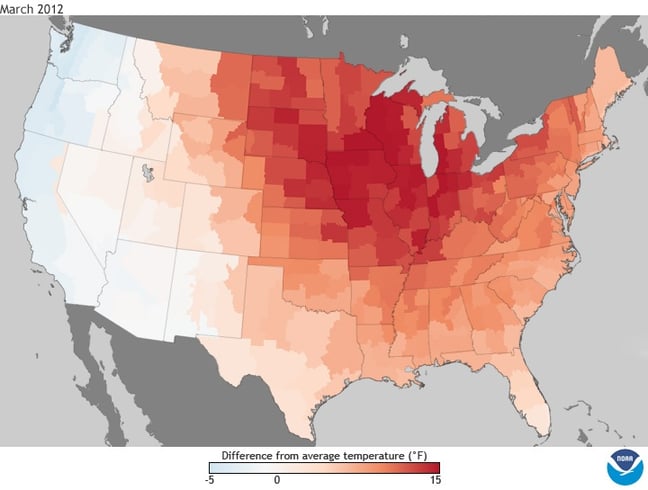 In fact, temperatures were so high that 2012 had the warmest March on record, beating the previous high set in 1895. Here are some more interesting statistics about March 2012:

While most folks likely welcomed the warmer temperatures with open arms, seismic shifts in weather patterns aren't without consequences. In addition to the warm weather, the NOAA also reported that there were 223 preliminary tornado reports, which is nearly triple the monthly average. The majority of tornadoes occurred over a two-day span across the Ohio Valley and the Southeast, and caused 40 fatalities and more than $1.5 billion in damage.

The Dangers of Warmer Temperatures

So far, it seems as if temperatures in April have balanced back out a bit, but it's possible that March was an indication that we could have a very warm spring and summer. Here are a variety of safety concerns that organizations should be prepared to address once the high temperatures reappear:

Adults and kids, like infants and toddlers, are susceptible to thermoregulatory shutdowns as well. Anytime the body's internal temperature reaches more than 105° a person is at risk for permanent disability or death. Learn more about heat exhaustion and heat stroke.

As the record number of tornadoes in March 2012 indicated, high temperatures can, and often do, lead to deadly storms. Severe weather systems devastated huge parts of the country last year. We wrote about the importance of tornado readiness on Culture Of Safety last year following the tragic Joplin tornado. We also highlighted how ignoring visible weather warnings may have contributed to five people dying after strong wind gusts caused a concert stage to collapse at the Indiana State Fair.

With so many sad stories last year we were happy to hear about disaster preparedness paying off for one of our customers. Read about how proper training and quick action can save lives.