I repeat those three things while tapping at my pockets all day long. I don't go anywhere without the three. Even when I'm at home I know precisely where my phone is at all times. I didn't know it until today, but there is no doubt that I am the very definition of a nomophobe. And according to a new study conducted in the UK, there is a very good chance that you -- and 66% of your closest family, friends, and co-workers -- are too. 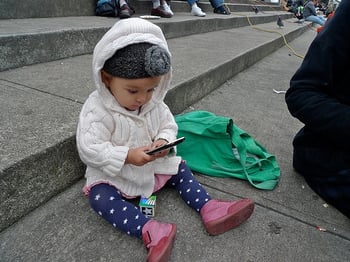 If you haven't pieced it together just yet, nomophobia is the fear of being without mobile contact. Four years ago, 53% of respondents said they had a fear of being separated from their phone. Today, that number is up to 66%.

While I'm not convinced that anyone actually believes that the 66% of self-proclaimed nomophobes experience fear to the same degree as those experiencing agoraphobia, arachnophobia, or claustrophobia; I do think everyone should take note of this trend and think about the impact it will have on the way we conduct our day-to-day lives.

The Four Worst Kinds of Nomophobes

I am a nomophobe. But as someone who makes a living by being constantly connected to mobile networks, I almost have to be. These four groups of people, on the other hand, don't make very good nomophobes.

Nomophobic childcare providers, babysitters, and parents should scare you. We all know that an unsupervised child can get into trouble in the blink of an eye. There are countless stories throughout this website that detail just how poorly things can turn out when someone in charge of watching a child gets distracted.

If you supervise a staff that watches over children, or if you are a parent that entrusts someone else to watch your own kids, you need to make sure you aren't dealing with a nomophobe. Someone with an itch to use Twitter, Facebook, or texting all day long probably doesn't belong in such an important position. In fact, a new study suggests that an increase in adults using smartphones may be a key reason we're starting to see the number of childhood injuries increase after several years of decline.

Texting while driving is one of the most visited pages on Culture of Safety. This is probably due to the fact that distracted driving impacts absolutely everyone. Unfortunately, there isn't much you can do to keep nomophobes from driving their own vehicles. What you can do, however, is put your own phone down and be extra vigilant when you are behind the wheel. Remember; doing anything while driving can be distracting. And no, Siri isn't the answer.

The study on nomophobia indicates that 77% of people between the ages of 18 and 24 claim to worry constantly about losing their phones. No information about minors was gathered in the study, but based on purely anecdotal evidence, I think it is safe to assume that a similar number of kids and teens are worried about being without their phones texting machines.

What kind of impact does this trend have on social development and education? It is hard to say for sure. What we do know is that constant connectivity appears to be having a profound, negative impact on the incidences of bullying and cyber-bullying. Educators, youth program coordinators, coaches, summer camp counselors, and anyone else that works with kids need to start developing tools to identify and address nomophobia. After all, the younger generation will someday be our childcare providers, lifeguards, and drivers. Then what?