A post from David Nagel, a West Bend Loss Prevention representative: Last week while at my son’s diving sectional I witnessed a female diver sprain her ankle as she was coming down on the board during her very first dive. When she came up to the surface of the water she was struggling and could barely swim to the edge of the pool. She was in a lot of pain!

While the girl was trying to make it to the edge of the pool a woman in the stands yelled out, “Somebody may want to help her!” The lifeguards - if they were doing their jobs - should have quickly responded without the woman in the stands saying a word. But even with her warning the lifeguards were completely unresponsive! They had no idea what was going on.

In fact, the young diver had to be pulled out of the water by swim coaches! As this was transpiring I was closely watching the lifeguards and the lifeguard manager. The manager, who I will refer to as “Mr. Smith”, had a short conversation with the lifeguard. I can’t be sure what was said between the two, but I very clearly saw Mr. Smith take a cell phone from the lifeguard. This was good, but a little too late!

Seconds before the diver needed assistance, this lifeguard was looking at and using his phone. How do I know? Because I was watching him… and I took a photo. You’ll be surprised, however, to learn that the photo below is not that photo. 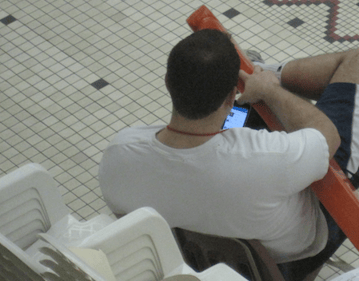 This photo of the lifeguard using his phone was taken AFTER the diver needed to be helped from the pool!

Unfortunately, this is not the first time I’ve photographed lifeguards at this pool with their phones in hand.

Last night I had had enough so I emailed the pool’s director and attached the photo. I told him, no holds-barred, that the issue of lifeguarding needs to be addressed. Incompetent and distracted lifeguards should not be tolerated.

I told the athletic director that this is an on-going issue and that nothing will change unless something tragic happens at the pool; last night should have been an eye-opener.

If you ever see a distracted lifeguard, speak up... someone's life may be at stake.

The first video in the Ten Commandments of Effective Lifeguarding series has four easy-to-implement strategies for putting an end to distracted lifeguarding. Visit the No Texting While Lifeguarding page for more details.