When is enough, enough? That's the question a lot of people are asking after a group of middle school students in Kentucky lost a basketball game 100-2. Yes, you read that right. One hundred... to two.

Pikeville Independent Middle School went up 70-0 by half time, before finally beating Kimper Elementary and Middle School by 98 points. Now, as word about the rout begins to spread, many are seeking severe repercussions for Pikeville's coach, Bryan Johnson. In fact, some sources had originally reported that the school board had been considering canceling the team's entire season.

I've always felt that athletic competition can be an incredible character builder. Important values like sportsmanship, humility, pride, dedication, and teamwork are built in victories and defeats. 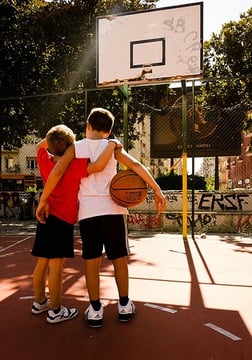 And while I don't think the "everyone-is-a-winner" mentality that 5 and 6-year-olds are raised on is appropriate for older kids, this is just too much for middle school students. Blowouts in high school, college and professional sports are one thing, but some of these kids were as young as eleven years old.

As we've covered in Shocking Footage: Bullied Child Fights Back and Safety Alerts on bullying and cyber-bullying... kids can be cruel. I think the coaches for both of these teams have given the losing team's peers far too much ammunition for playground taunts and mockery. In fact, you don't need to look any further than Twitter to see demeaning comments (potentially NSFW) directed at the Kimper Elementary and Middle School players.

What do you think?

Am I being overly sensitive?